150 Years of Educating at Parade College

This year marks 200 years of Catholic education in Australia. For 150 of those years, Parade College has been providing quality education to generations of young men—from its original site in East Melbourne to its current home in Bundoora.

The school held its 2021 Opening Mass and inaugural event of their sesquicentennial year on Friday 29 January, with Archbishop Peter A Comensoli congratulating staff and students on this significant milestone.

College Principal Andy Kuppe, himself a graduate of the College, expressed his delight at marking the occasion: ‘What a blessing that the day selected [for this gathering] is 150 years to the day that the first Bishop (Archbishop James Alipius Goold) opened Parade College with Mass on 29 January 1871.’

Andy Kuppe is the College’s first lay principal, following 148 years of leadership by the Congregation of Christian Brothers, beginning with Br Ambrose Treacy and concluding with the retirement of Br Denis Moore in 2019.

The Christian Brothers arrived in Melbourne in 1868 at the invitation of Archbishop Goold. They began teaching in a small primary school at the rear of St Francis’ Church on Lonsdale Street.

They soon began planning for the establishment of a permanent foundation, monastery and school on land they had procured in Victoria Parade, East Melbourne (now the site of Catholic Theological College). On 29 January 1871, Parade College was blessed by Archbishop Goold and dedicated to Mary Immaculate.

In 1953, a new Parade Preparatory College was erected in Alphington with the assistance of the Old Paradians Association (OPA). By the late 1960s, the East Melbourne campus could no longer house the growing number of students and a decision was made to transfer from the inner city site to the outer city fringe in Bundoora.

A new school was erected on front acreage of the Christian Brothers Training College and farm. By 1968, there were close to 800 students, 21 full-time teachers (13 of whom were Christian Brothers), eight lay staff and five assistant teaching staff.

These days, the Edmund Rice Campus of Parade College in Bundoora is proud to educate more than 1,800 students and a combined staff of almost 300 personnel. The College also offers Certificates II and III in Building and Construction through its Trade Training Centre, a facility that is open to students from all local schools and has expanded its trade training options comprehensively over the past decade.

As part of the College’s 150th-anniversary celebrations, Archbishop Comensoli was presented with a reproduction of the painting Mater Amabilis (“Mother most loving”). This depiction of Mary originally hung in the parlour of the Christian Brothers School monastery in Thurles, County Tipperary, Ireland. In the early 1850s, Patrick Ambrose Treacy (Founder and first Principal of Parade College) was a student at the Thurles school, and upon visiting the monastery saw the picture and was deeply moved given his deep devotion to Our Lady. Many years later, Br Patrick visited Ireland from Australia, and the Director of the Brothers in Thurles gave him the picture to take back to Australia.

For many years the painting held an honoured place in the motherhouse of the Christian Brothers in East Melbourne until it was lost during a move. When Parade College assumed responsibility for the Brothers’ residence in the 1990s, the original was found rolled up in a cylindrical container in a cupboard in one of the rooms. It now hangs proudly in Parade College’s Heritage Room. 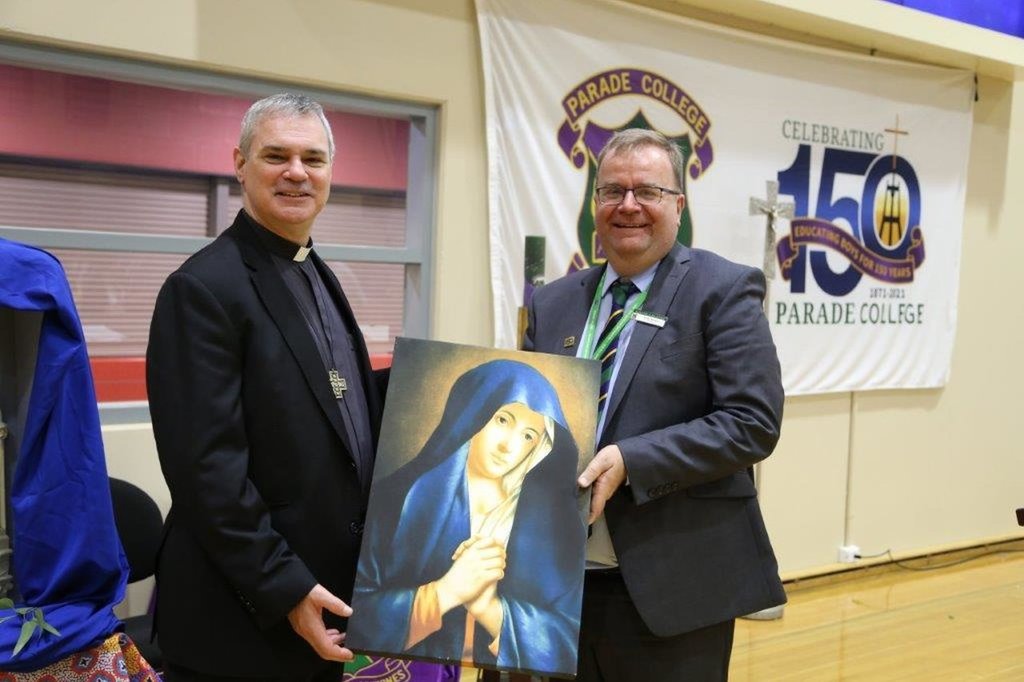