Getting around a busy high school campus used to be a major challenge for Oliver Fanshawe. The Brisbane teenager, who is legally blind, once relied on his white cane to help him move between classrooms. Walking along the stairs and footpaths with hundreds of other noisy boys rushing by at the same time, could be a slow and disorientating process. His cane would get jammed on objects in his way and fellow students sometimes tripped over it.

But that all changed when Sadie entered his life — his “new best friend”. According to Oliver, the highly trained two-year-old golden retriever — a seeing eye dog — has made navigating the school grounds “a lot easier”.

“She’s built my trust, at first I was a bit worried but then it was completely fine, she’s been good.”

The partnership between Oliver and Sadie is a milestone, with the 14-year-old becoming the youngest person in the country to be given a seeing eye dog by Vision Australia.

Sadie was trained by a team at Seeing Eye Dogs, a division of Vision Australia and funded by the National Disability Insurance Scheme (NDIS).

The pair was matched after Oliver underwent a rigorous assessment process that looked at his lifestyle and whether he had enough work for a dog.

Trainer Brooke Anderson said it took two years to find the right dog to suit Oliver, taking into consideration his personality and the way he walked.

The main concern was finding an animal to cope with the difficult school environment.

“There’s balls that drop suddenly, kids running around and food on the ground,” Ms Anderson said.

“We needed a dog that was adaptable, a dog that could grow with Oliver over the next eight years.”

Previously, people who were blind or vision impaired didn’t receive a dog until they were at least 16 years old, as young people typically didn’t have enough work to keep a dog busy, and therefore, engaged.

Ms Anderson said times were changing, and Oliver “ticked all the right boxes”.

“We used to instantly rule someone out because we made assumptions about whether they could handle the dog or that they didn’t have the workload,” Ms Anderson said.

“Oliver was mature and he had the ability to be able to care not just for himself but the dog as well.”

Before hitting the school grounds at Ambrose Treacy College together, Oliver and Sadie spent two weeks training with Ms Anderson at the Seeing Eye Dogs facility in Melbourne. Oliver did obedience training with Sadie, learnt how to give her commands and care for her. It was also an opportunity for Sadie to show off her guiding skills.

After leaving the training centre, Oliver took Sadie home and she began learning the routes he takes to the school bus stop and his weekend sporting activities. When the pair started at school, Ms Anderson said it was vital Sadie could cope with subjects like building and construction where there was noisy machinery like sanding belts and electric saws.

“It was essential for Oliver as that’s one of his favourite subjects … so it was making sure Sadie was comfortable but that he also knew how to support her,” Ms Anderson said.

“Sadie sleeps through the whole class, she has no idea what’s going on.”

“I didn’t grow up with seeing eye dogs or students with [disability at school] but it’s a wonderful education for our boys,” Mr Gardiner said.

“This is the society they’re going into, where they see diversity and where it’s not just tolerated, it’s celebrated.”

Sadie will soon receive her very own student card and Mr Gardiner said he was really proud of the way the boys had responded to her arrival.

“The other students are aware of Sadie and when her harness is on and she’s working, they respect that,” Mr Gardiner said.

“But when it’s off they love communicating with her or patting her.”

For Oliver, having Sadie also means being more confident about the future.

“I feel really comfortable and I can be a lot more independent with Sadie,” he said.

“She’s helping me go everywhere and made it a lot easier.”

While Ms Anderson will continue to check in on the pair, she said it was clear the match had been a success.

“Oliver and Sadie’s relationship has been really lovely to watch,” she said.

“They’re close already so to see them in the next year or two I can’t even imagine where it’s going to grow to.” 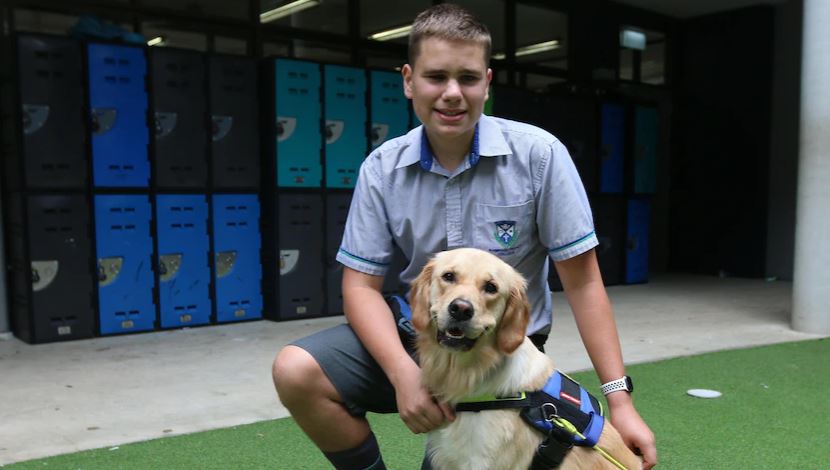