Liam Foldi is a Year 11 student at St Kevin’s College in Melbourne. When he was in Year 9 he had a bright idea. He conceived of a social enterprise to help a range of justice initiatives, raising awareness and funds at the same time. He was keen to help Zimele in particular, a project which is close to the heart of St Kevin’s. For 12 years Zimele has been building connections with Edmund Rice ministries and communities in East Africa. Zimele changes lives, both in Africa and here. Liam warmed to this idea.

Liam developed Kenshi Candles and has really stuck at his commitment. ‘As a young person growing up in a wealthy city like Melbourne, I found that most people honestly want to help others, but the hectic demands of life can make it hard to give back regularly. Kenshi is about enabling people that want to make a real difference to raise thousands of dollars. This means they can focus on the real work of making a difference, instead of spending all their time raising money.’

Kenshi Candles has raised literally ten of thousands of dollars. Liam explains: ‘After 18 months, this initiative has directly funded projects in Australia, Kenya, Sri Lanka, Papua New Guinea and Myanmar. Now, struggling to keep up with demand, we are collaborating with the Chin refugee community in Melbourne to produce the candles. After fleeing from civil war in Myanmar, these amazing people are now earning much needed income by making the candles here in Melbourne.’

Liam has a flair for business coupled with a social conscience that enables his gifts to serve others. It is, as the saying goes, better to light a candle than to curse the darkness. Liam has lit hundreds of candles! 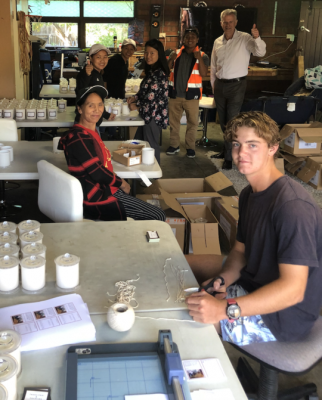